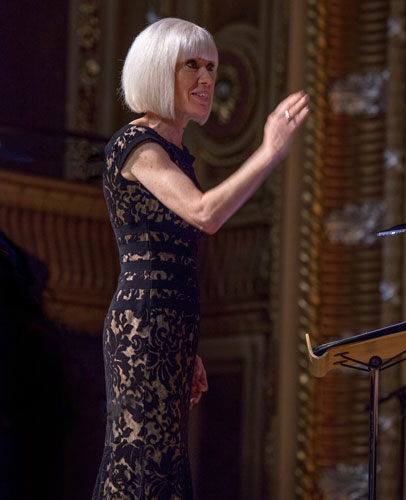 Kathleen Rodde, a member of the music faculty at Iowa State University since 2000, conducts two women’s choirs, Cantamus and the 100-voice Lyrica, in addition to Count Me In, a women’s jazz ensemble. She also teaches classes in choral methods and piano skills, and assists with the Iowa State Singers. Alpha Lambda Delta and Phi Eta Sigma Honor Societies have recognized Kathleen for her positive influence on students at Iowa State.

Kathleen has appeared as conductor, accompanist, and presenter at regional and national ACDA conferences and she has served as the North Central Repertoire and Standards Chair for Women’s Choirs. Choirs under her direction have performed at the 2000, 2004 and 2010 NC-ACDA Conferences, the 2004 MENC National Convention, and the 2013 and 2017 ACDA National Conferences. Recent conducting engagements include the Minnesota, Wisconsin and Texas, North Dakota, New Mexica and Georgia All-State Women’s Choirs, and the ACDA Southern Conference Women’s High School Honor Choir.

In 2013 Kathleen created an advanced women’s choir consortium that commissions composers annually. Her arrangements and editions for women’s choir are published through Hal Leonard.

Prior to her appointment at Iowa State, Kathleen served as a member of the University of North Dakota music faculty from 1990-2000.