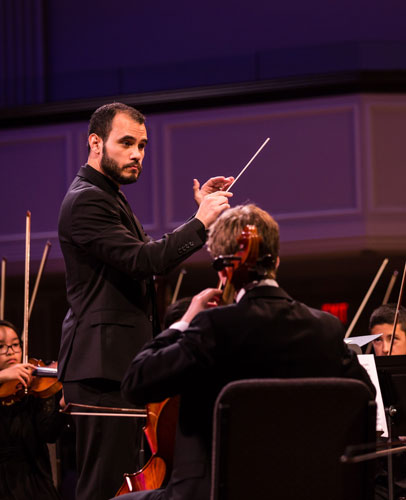 Matthew Moreno is the Director of Orchestras at Jasper High School in Plano, TX. His groups have enjoyed the success of consistent UIL Sweepstakes awards, first division ratings and “best in class” awards at festivals. In recent years the Jasper Legacy orchestra was ranked by Texas Music Educators Association as the number 2 orchestra in Texas. Mr. Moreno is graduate of Texas State University in San Marcos, Texas, where he received his bachelor’s degree in music education with an emphasis in Instrumental Studies. Over the past 7 years, Mr. Moreno has served as one of the music directors at the Texas State Strings Camp. Prior to becoming DAAYO’s Philharmonic Orchestra conductor, he also taught with the Collin County Youth Orchestra, UT-Arlington Strings Camp and now serves as the Plano ISD Strings Camp Director. He also served as director at Frankford Middle School (Plano ISD) and at Killian Middle School (Lewisville ISD). As a double bassist, he has performed with various Texas orchestras, musicals, jazz groups, and often on cello with string quartets. He is a member of the Texas Music Educators Association and the Texas Orchestra Directors Association. Outside of teaching and performing, he is an active composer and arranger for orchestral music having been published with FJH Music and Grand Mesa Music. JW Pepper Music selected his works as “Editor’s Choice” and have been performed at the Midwest Band and Orchestra Conference in Chicago as well as UIL Contest.