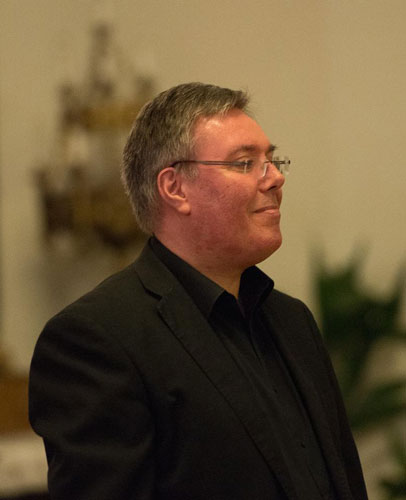 Rupert Damerell began his musical career as a chorister at St George's Chapel Royal, Windsor Castle, where he commenced his organ studies at age 10, having started the piano at 4 and violin at 6. From there he studied music at Eton College, violin at the Juilliard School in New York, and was a member of the National Youth Orchestra of the United Kingdom. He later read music at King's College, Cambridge, where he was a countertenor choral scholar in the world-famous choir under the direction of Stephen Cleobury, appearing on various recordings during his time there.

Based in Madrid, Spain, since 2002, Rupert sings with various early music groups throughout Europe, such as Huelgas Ensemble, Opera Fuoco, Los Músicos de su Alteza, Proyecto Guerrero or Capilla Principe de Viana. Recently he also collaborated with Alamire and Ensemble Plus Ultra. His directing credits include various choirs and ensembles in Spain, including Zenobia Consort, Zenobia Scholars, Quondam, and the instrumental group Palmyra Ensemble. Rupert is very active in the field of education for singers, giving seminars to choral conductors and singers, as well as co-directing choral courses and projects in Spain with directors and groups such as David Skinner and Alamire, Stephen Cleobury, John Rutter, Ensemble Plus Ultra, Stile Antico and Voces8. He also co-directs the Tallis Scholars Summer Course with Peter Phillips every summer in Ávila and is artistic co-director of the International Music Festival of Las Navas del Marqués since 2010.