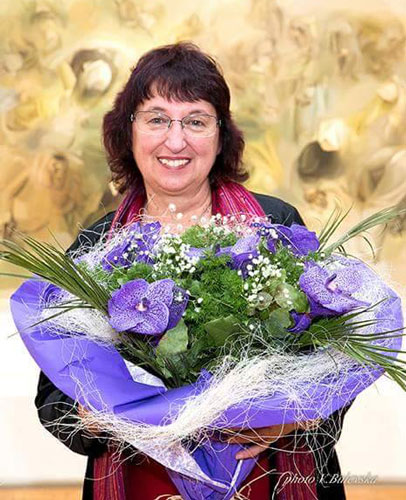 Theodora Pavlovitch is a Professor in Choral Conducting and Head of Conducting Department at the Bulgarian National Academy of Music. She has worked with The Bulgarian National TV-choir and Vassil Arnaudov Sofia Chamber Choir, and under her baton the choir has won awards at international competitions and has taken part in international festivals, in TV and radio-programs, and concert tours in 25 countries. Since 2005, Theodora Pavlovitch has conducted the Classic FM Radio Choir. In 2007/2008 she conducted the World Youth Choir, honored by UNESCO with the title Artist for Peace. She has also worked with the Chamber Choir of Moskow State Conservatory “P.I. Tchaikovski,” and the Taipei Philharmonic Chamber Choir. Prof. Theodora Pavlovitch has been invited to attend international events in 27 European countries, the USA, Japan, Russia, China, Hong Kong, Taiwan, South Korea, Israel and Argentina as a member of jury panels, conductor or lecturer. In 2005, she led a Master class for choral conductors in the program of the 7th World Symposium on Choral Music in Kyoto, Japan. Prof. Pavlovitch has been awarded Golden Century Star National Award bestowed by the Minister of Culture of Bulgaria, Golden Lyre by the Union of Bulgarian Musicians, Heart of Sofia Prize by Sofia Municipality and Ministry of Education and Science, and several Special Prizes of the Bulgarian Choir’s Union and Classic FM Radio.