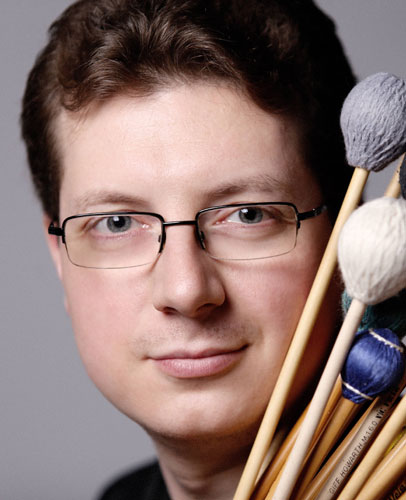 Denis made his Great Hall of the Moscow Conservatory debut performance at the age of 10. He is frequently invited to teach masterclasses around the world and has been serving on various jury panels including the Italy Percussive Arts Society International Competition in Italy and the Drumwave International Festival-Competition in St. Petersburg, Russia.

Mr. Petrunin has recently joined the faculty roster of the Curtis Institute of Music's Mentor Network online learning program. His performances have been broadcast on WHYY radio (Philadelphia, PA). His awards include the Avedis Zildjian Percussion Scholarship, PASIC 2009 Chamber Competition Winner, and the Spivakov Foundation Scholarship.

Denis and his wife, violinist Anastasia Petrunina, have founded a concert duo named ViMaDeAn. Their performances have been welcomed by various audiences in the United States, Europe, and Russia. Striving to expand the repertoire for violin and percussion, ViMaDeAn Duo dedicates its artistic brilliance to the creation of new chamber music works, education of audiences of all ages, and uplifting people through music-making. They work closely with living composers to expand the original repertoire for their unique instrumental combination.

Mr. Petrunin held the position of Co-Principal Timpanist of the State Academic Symphony Orchestra in Moscow, Russia during the 2007--2008 concert season. He also was the Principal Timpanist/Percussionist of The Moscow Chamber Opera Theatre and the Stanislavsky and Nemirovich-Danchenko Moscow Music Theatre.