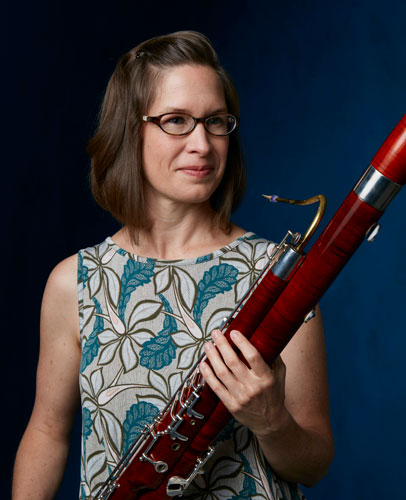 Bassoonist Cara Luffey's varied career as an orchestral musician has taken her from Graz, Austria with the AIMS Festival Orchestra, to a tour of China with the Mantovani Orchestra. She has previously held principal seats with the Victoria Symphony, Laredo Philharmonic, and Corpus Christi Ballet Orchestra and has performed with the San Antonio Opera, San Antonio Symphony, Mid-Texas Symphony, Charleston Symphony Orchestra, and Corpus Christi Symphony. After playing third bassoon and contra with the El Paso Symphony for three seasons, she is currently the principal player and can often be heard performing with the El Paso Opera and Las Cruces Symphony as well. In a career highlight, she was EPSO's featured soloist in a performance of John William's Five Sacred Trees in 2017.

Ms. Luffey's love of chamber music began during her undergraduate studies where she was a finalist in the Coleman and Carmel Chamber Music competitions as a member of the Siren Trio. She has continued to perform chamber music throughout her career in recitals at Star Classics in San Francisco, CA, Shadyside Concert Series in Pittsburgh, PA, Texas A&M University at Kingsville, Texas Lutheran University in Seguin, TX, San Antonio, TX, Austin, TX, and with her colleagues at University of Texas at El Paso. Her desire to create unique programs led to a recent collaborative recital of French and Latin works for voice, bassoon, and piano. She was also a member of the UTEP chamber players who premiered James Stephenson's Octet paired in performance with the Stravinsky Octet.

In addition to her civilian accomplishments, Ms. Luffey won a position with the US Air Force Band at Langley Air Force Base, VA. in 2001 and served for four years. She was also stationed in Sembach, Germany with the USAFE Band. During this time she performed in various countries and settings throughout the Eastern US and Europe in woodwind quintets and concert bands. As a member of these organizations, Ms. Luffey also aided with ensemble publicity, operations, and quintet programming.

A dedicated teacher, Ms. Luffey has experience with all grade levels and settings. As Lecturer of Bassoon at University of Texas at El Paso since 2014, she enjoys fostering a love of music in students and mentoring them on their journey. Whether teaching private lessons & reed making, coaching chamber groups or orchestral sectionals, or preparing double reed ensemble programs, Ms. Luffey's utmost goal is to support her students' growth.