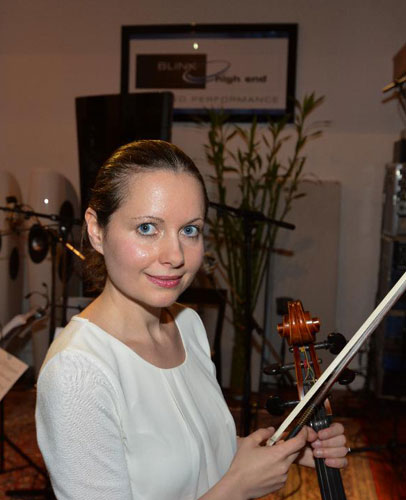 Daria began her cello and piano studies at the age of seven at the Kharkiv Special Music Boarding School in Ukraine and, later, in the Preparatory Department of the Longy School of Music, where she was a principal cellist of the Young Performers Chamber Orchestra, conducted by George Ogata. Since then, she completed five years as a principal rotation cellist at the Boston University Symphony Orchestra and was a substitute cellist for the Boston Ballet Orchestra.

As a Cello/Piano duo, Daria's collaboration with pianist Paul Jacobs started in 2004, and their programs include works by contemporary composers, standard chamber music and the concerto repertoire, including premieres of new works by new composers and recordings. In 2005, Daria founded the Nocturne String Quartet, whom had premiered an award winning composer David Janssen's String Quartet No. 1. Daria has been collaborating with her husband, David Janssen, premiering, editing and recording his works as a cellist and pianist, while working together with violinists Bayla Keyes, Julia Glenn and violist Xi Yang and pianist Paul Jacobs.

Besides teaching and performing, Daria's recent projects include the transcription of J.S. Bach's 2nd Violin Partita for Solo-Cello, research work on the Dvo?ak's Cello Concerto and a community outreach recital series with Petting Cello Zoo for kids and adults of all ages.