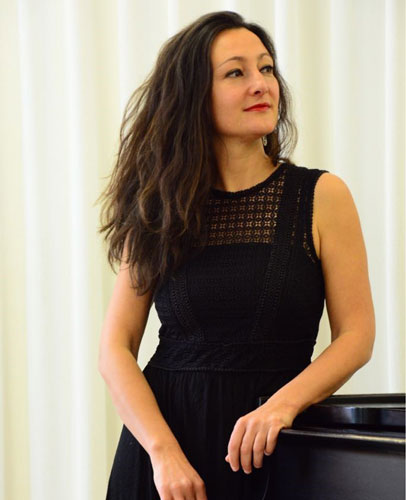 Doriana Tchakarova completed her Bachelor and Master studies in piano at the Musikhochschule Stuttgart with Prof. Fernando Kaeser and Prof. Friedemann Rieger. She also studied in the Lied class taught by Prof. Konrad Richter. In April 1993 she won the second prize in the international piano competition "Dimitar Nenov” and played the second piano concerto by Sergej Rachmaninoff with the Varna Philharmonic. Doriana was the Chamber Music Prize Winner of the 15th International Competition "Franz Schubert" with the cellist Krassimira Krasteva in Italy in July 2001. In 2004 Doriana won the second prize in the Schubert Competition of the Concorso Internationale di Interpretazione Musicale Citta di Racconigi in Italy with her vocal partner Judith Erb, soprano. Since October 2003 she has been a vocal coach at Musikhochschule Stuttgart.   Doriana Tchakarova also has a busy, international concert career as a chamber musician and lied pianist with partners such as Ulrike Sonntag, Nathalie Karl, Matthias Klink, Sylvia Koncza, Thomas Volle, Mirella Hagen, Turid Karlsen, Patrizia Piras, Reiner Holthaus, Thomas Pfeiffer and frequently with the SWR -Vokalensemble. She is also successful as a piano teacher and is a sought-after accompanist for numerous singing masterclasses. Many of Doriana’s students are national prize winners of "Jugend musiziert" and have studied at German music academies. She has made recordings with the sopranos Judith Erb and Felicitas Erb with songs and duets by Robert Schumann, Hugo Kaun, and Louis Spohr at ARS production, which attracted a great deal of attention in the specialist press. She has also made a recording of duets by Felix Mendelssohn and Fanny Hensel, which was published by ARS in 2016 and was met with an overwhelming response throughout Europe. This recording was nominated for the echo prize in 2017, among other awards. Together with Konstantin Krimmel, she won first prize in the song duo category at the "Rising stars Grand Prix international music competition" in Berlin in May 2018.