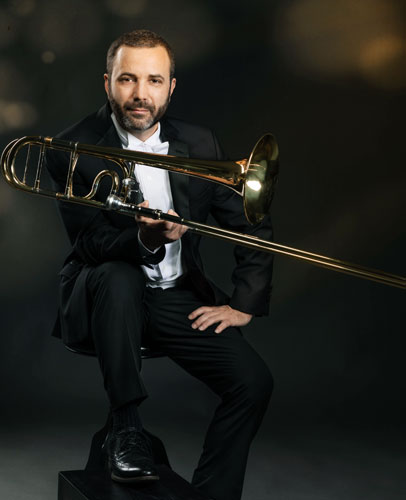 Obsessively focused on 20th century trombone repertoire and vocal transcriptions, James Martin can usually be found drawing on his European and American training to present a new brand of trombone recital around the Mid-Atlantic region. Often touring the US with organist Dan Miller as Duo twoRESONATE, the two made the North American premieres of Enjott Schneider's Golgatha (bass trombone & organ) and Drei Pastelles by Reinhard Raue (alto trombone and organ) at the International Trombone Festival in 2019. Martin was named Professor of trombone at Shepherd University in 2016, and hosts an annual workshop there with musicians appearing from all over the world as guest artists. He received a Master of Music and Pedagogy from the Royal Conservatory of Music in Aarhus, Denmark where he also performed with the Aarhus Symphony and a bachelors degree from Shenandoah Conservatory.