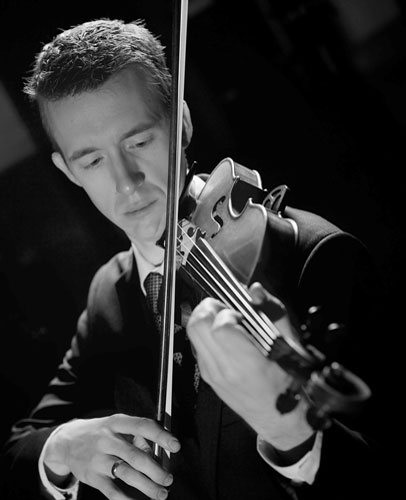 A passionate chamber musician, He performs regularly with his wife collaborative pia-nist Dr.Kristen Ironside as part of the Ironside Duo. He has been a member of the Hendiatris Trio -- an ensemble which champions new compositions alongside timeless classics and prioritizes educational programs and coaching young chamber musicians in programs around the Carolinas. He has performed with members of the St. Law-rence String Quartet, and Dimitry Sitkovetsky.

He is an ardent supporter of contemporary music, regularly premiering new and com-missioned works. He has premiered numerous works with Classical Revolution PHX, with River Tree Singers and performed with members of Paradise Winds and McGill's Contemporary Music Ensemble. As a soloist he has appeared regularly with the BJU Symphony and String Orchestras, North Valley Chamber Orchestra (Paradise Valley, AZ), and at the Charles Ives Festival at ASU.

As an orchestral musician, Ironside frequently performs with Greenville Symphony (SC), the Asheville Symphony (NC), and Charleston Symphony (SC). He also per-formed with the Phoenix Symphony, Winston-Salem Symphony and been a member of the Greensboro Symphony. He has served as Concertmaster and Principal 2nd of the Greensboro Opera Company as well as Greensboro Light Opera and Song. He has served as principal violin with Classical Revolution PHX, Bel Canto Company (SC), the Aspen Music Festival's Concert Orchestra, and the Aspen Opera Theatre Compa-ny.

An enthusiastic educator, Ironside has extensive experience as a teacher and coach. At the University of North Carolina Greensboro he served as Doctoral Teaching Assis-tant from 2012-2015. From 2010-2012 he acted as a regular chamber music and or-chestral coach in the Gilbert Public Schools. He was also instrumental in the develop-ment of the Suzuki violin program at Biltmore Preparatory Academy. His private teach-ing has also had a focus on children with special needs including autism.

He earned his Doctor of Musical Arts degree serving as graduate teaching assistant to Marjorie Bagley at the University of North Carolina at Greensboro. Ironside holds a Master of Music degree in Violin Performance from Arizona State University where he received the Special Talent Award studying with Dr. Katie McLin. He received his Bachelor of Music at the Schulich School of Music at McGill University (Montreal, Can-ada). Mentors of his include Dr. Katie McLin, Denise Lupien, Mark Fewer, and Jona-than Crow Andrew Campbell, Kyoko Hashimoto.