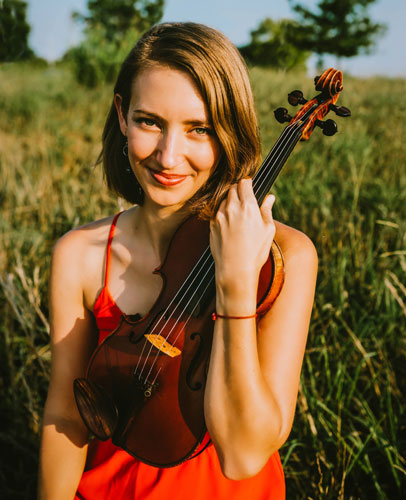 Rachel Loseke grew up and began her music training in Sioux Falls, SD, under the tutelage of Dr. Raymond Sidoti. After high school, she attended the Cleveland Institute of Music, where she studied with Linda Cerone and received a Bachelor's degree in violin performance. Rachel is currently living in Knoxville, Tennessee, where she is a full-time violinist of the Knoxville Symphony Orchestra. In the past she played regularly with the San Diego Symphony and Orchestra Nova, on violin as well as viola, and in 2011 she won 1st Place String Instrumentalist in the Grossmont Community Concert Association Competition. In 2018, Rachel took a sabbatical in New York City, where she studied with Lisa Kim and had the opportunity to play as a substitute with the New York Philharmonic on several occasions. While in NYC, she also won and held positions with the Cape Symphony and the Princeton Symphony Orchestra. She has since resumed her position in the Knoxville Symphony and residence in Tennessee.