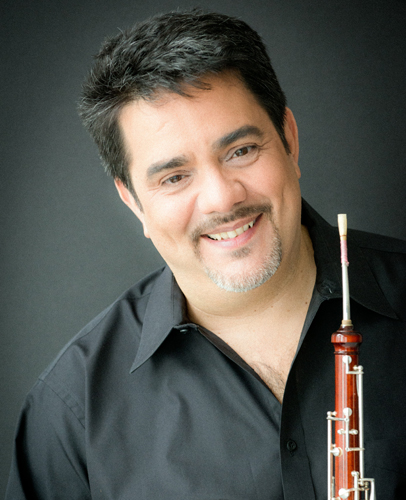 Pedro R Diaz joined The Metropolitan Opera in 2005 and has performed as solo English hornist in hundreds of productions. As a sought after teacher, Mr. Díaz has lectured extensively at the top music conservatories such as The Juilliard School, The Manhattan School of Music, The Eastman School of Music, The Hartt Music School and Duquesne University. His international appearances include masterclasses in Panama, Italy, Mexico, Canada, Costa Rica, Puerto Rico, Leipzig, Berlin, and Italy.

A native of Puerto Rico, he received his early musical training in the "Escuela Libre de Musica", an esteemed public school for the performing arts. He has performed as a guest artist with The Chicago Symphony, Dallas Symphony Orchestra, Pittsburgh Symphony Orchestra, and The New York Philharmonic, among others.

On a recent research trip to Italy, Mr. Diaz was able to track down the original solo and orchestral parts for the Donizetti Concertino for English horn (1816), at the Museo Internazionale e Biblioteca della Musica di Bologna. For the first time in two hundred years, these materials have been published in a critical edition by Theodor Presser, along with a new album release performance by Pedro Diaz, featuring Riccardo Frizza and musicians of The Metropolitan Opera Orchestra. His playing has been hailed by critics as evocative, eloquent and expressive and is considered one of the pre-eminent players of his generation. Mr. Diaz has performed the opera, Tristan und Isolde by Richard Wagner, sixteen times in three different productions under the batons of James Levine, Daniel Barenboim and Sir Simon Rattle.