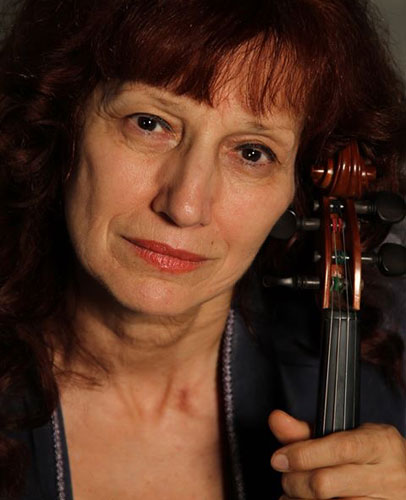 Dr. Roumena Georgieva is an accomplished violinist with an international solo performing career spanning five decades. At the age of 23, she became the youngest female Concertmaster with the Bulgarian National Radio Symphony Orchestra. She also held the position of Concertmaster and Soloist with the famous Ladies' Chamber Orchestra of Bulgaria and toured many times with both orchestras in throughout Europe, as well as performing as a soloist with the symphony orchestras of Rome, Milan, Berlin, Leipzig, and Thessalonica.

Her solo recitals with piano at Lake Forest College in Chicago, Reinhardt College in North Georgia, Emory University, Spelman College, Morehouse College and Georgia State University in Atlanta were noted for their introduction of new and experimental music alongside more traditional pieces. The broadcasts of her performances with the Spelman College Glee Club in 2004, 2006, 2008,2011 ,2016, and her performance for the 2013 Allen Awards on AIB TV and Planet Atlanta on Peoples TV 2017, reached even more diverse audiences.

Dr. Georgieva has performed regularly with Americolor Opera Alliance since 2008. The noted Composer Dr. Sharon Willis dedicated to Dr. Georgieva her "Spirit Suite "for Violin and Piano in 2014.Dr. Georgieva performed the "Spirit Suite" in the International Music by Women Festival in March 2, 2018 at the Mississippi University of Women. Dr. Sharon Willis dedicated to her and her recent work "Toccata" for solo violin. It will be premiered by Dr. Roumena Georgieva at the Convention of the National Association of Negro Musicians on July 14th ,2022 at Atlanta. The young African American composer Brittney Boykin also dedicated to Dr. Georgieva her work" Roumieva" for violin and piano in January 2018.

Dr. Georgieva's awards and honors span from her winning the prestigious Grand Prize for Young Bulgarian Violinists at the age of 10, to being a Permanent Juror on the Committee for the Awards and Scholarships with the Atlanta Chapter of the American Federation of Musicians. She is a member of Phi Kappa Phi Honor Society a member of Delta Kappa Gamma International Honor Society for Key Women Educators a member of MAMA, a member of American Association of Pen Women and a member of UNA in USA.

Her career as a performer is paralleled with her distinguished teaching profession, which she started in 1978 as an Adjunct Professor at the National Academy of Music in Sofia. She continued on the faculty there until 1990, when she accepted a position at the New Conservatory of Thessalonica. Since arriving in the United States, she has taught at Elmhurst College (Chicago ), Reinhardt University, Clark Atlanta University, Spelman College, and Morehouse College in Atlanta.

In June 2019 Dr. Georgieva started to work as a Professional Consultant and Performer. Her lectures on the topics of "Violin Virtuosos from Paganini till Now Days" at the American University in Washington DC in February 2020 were noted by the faculty and the students as unique and influential.

In September 2007 Dr. Georgieva published her book "Method and Methodology of Violin Training in the Beginning of the 21st Century," which clarifies the health and performance benefits for string players using the Alexander Technique. In 2008 and 2009 Clark Atlanta University published chapters five and six from her book. The revised first chapter of the same book, was published at the International Journal of Arts and Sciences, Volume 4, February 20, 2018.

Dr. Georgieva has three children, a son, and twin daughters.