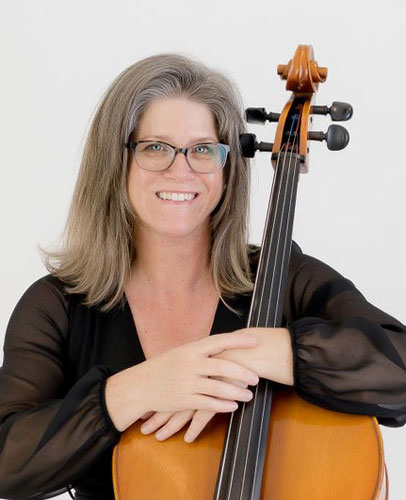 Cellist Tamar Ben-Pazi has been a mainstay of South Carolina's classical music scene for over two decades. She has served as principal cellist with the Long Bay Symphony and section cellist with Florence Symphony, Charleston Symphony, and the South Carolina Philharmonic. As the owner of Strand Strings, Tamar provides solo and chamber music to weddings, parties, and corporate events throughout the Grand Strand and surrounding counties. She's had the pleasure of performing as a pit musician for Coastal Carolina University's Music Department, and has recorded with Bickleigh Bridge, backed up Aretha Franklin, Bert Bacharach, Dionne Warwick, and The Moody Blues among others. Tamar began her professional training at the Thelma Yellin School of the Arts in Israel and subsequently earned a BM in Cello Performance from the North Carolina School of the Arts and an MM Ed from Anderson University. A strong believer in the importance of musical education, Tamar is the Orchestra Director for Horry County Schools, served as an Adjunct Cello Professor at Coastal Carolina University, and managed Long Bay Symphony's education programs and youth orchestra. She also enjoys teaching the young and young at heart privately, incorporating traditional pedagogy methods as well as Suzuki philosophies