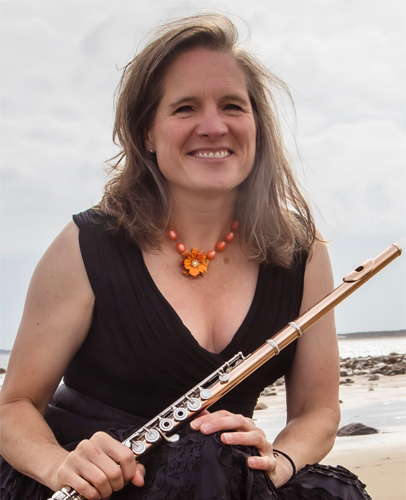 Flutist, Vanessa Mulvey's playing has been described as "ethereal" by Fanfare Magazine. She shares her passion for music-making through teaching with an integrated whole-body approach to playing that empowers musicians to reach their potential. At the foundation of her teaching are the principles of Body Mapping which reveal movement freedom and ease that elevates expression, tone and coordination.

Passionate about chamber music, Ms. Mulvey has been a featured performer in concert and on radio. She has performed for audiences that range from WGBH, WSLU, North Country Electronic Music Festival, National Flute Association Conventions, King's Chapel, Greater Boston Flute Association (GBFA), Wolfeboro Friends of Music, Chromatic Club, and Longy SeptemberFest and Faculty Artist Concerts. In 2002, she presented the Jordan Hall premiere of John Heiss' Apparitions for flute, piano and electronics, commissioned by the 80th Birthday Project of Robert Willoughby.

Ms. Mulvey is a faculty member of the Longy School of Music of Bard College, and the New England Conservatory. She is a licensed Body Mapping Educator coaching musicians of all instruments one on one and in classes. In addition, she has been a guest artist at conservatories and for organizations around the world that include Peabody Conservatory of Music, Performing Arts Medicine Association International Symposium, Shepherd School of Music, University of Michigan, Festival de Flautistas del Perú, Utah Flute Association, Brigham Young University, Maine Chamber Music Seminar, Frost School of Music, the Boston University Tanglewood Institute, and National Flute Association.

Following her introduction to Body Mapping, Vanessa set out on a path to understand human movement more deeply. The journey led her to fly on the trapeze, study Core Movement Integration and the Monkey BodyTM and most recently to explore the urban playground with Parkour. She is in the process of completing the qualifications of Level 1 Parkour coaching along with Certified Personal Trainer to continue to build her understanding and breadth of experience. These unique experiences and perspectives help her guide musicians to experience the powerful connection between movement and music-making as they contribute to playing health. She is also a Level 1 Core Movement Integration practitioner.

During the pandemic she began the Practicing Turned Upside Down blog sharing ideas on different ways to approach practicing and performance. Her writings on flute playing and pedagogy have been published in Flute Talk magazine and she is a contributor to both editions of, A Young Musician's Survival Guide (Oxford) by Amy Nathan. A graduate of the Crane School of Music at the State University of New York in Potsdam and the Cincinnati College-Conservatory of Music, teachers include Kenneth Andrews, Kyril Magg, Jack Wellbaum, Trudy Kane and John Heiss. www.breathemoveperform.com